No dog is more maligned, mistreated, or misunderstood than the pit bull. A generation ago, the pit bull was the loyal sidekick to The Little Rascals on TV, was the mascot of the Buster Brown children’s shoe company, and was a companion to the likes of Helen Keller and President Theodore Roosevelt. While you are browsing these pages we here at Out of The Pits hope you leave with a better understanding of the pit bull terrier, and hope that you open your home and hearts to one of our dogs.

What you will discover here, are some amazing and true accounts of people, Pit Bulls in need, and their efforts to help each other. Some of these tales will make you smile– others will infuriate you as you read of abuse and neglect– and some will undoubtedly leave you with a lump in your throat. An important fact to note is that everyone involved embarked upon a personal journey through uncharted territory. Neither man nor animal had any real sense of what lay ahead. Yet, through patience, love, trust and respect, all arrived at their destinations changed for the better.

Every day thousands of dogs assist people as therapy dogs. Many visit senior citizen homes and give residents something to look forward to each week. They literally wait for the moment a therapy dog walks through that door so they an lavish attention and praise on them. Pit Bulls serve as outstanding therapy dogs. The following dogs highlight their remarkable diversity. 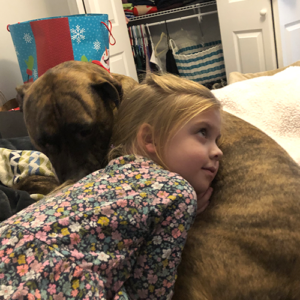 As OOTP dogs become stars on the agility field, make therapy visits in nursing homes and hospitals, provide humane education in schools throughout the Northeast and increasingly participate in law enforcement, all of them remain stars in the heart of their families.
As we continue to develop our new website you will find an increasing number of “love letters” written by our adopters whose Pit Bull has brought to their family love and loyalty such as they have never known.

Known originally in England as the “nursemaid’s dog,” the Pit Bull Terrier wants to be right in the heart of your family, wants to sleep with you (if it’s not against the rules), wants to lie at your feet as you work on your computer, wants to “hang out” with the kids, greet their friends, and wait for their return from school.

He or she won’t be a very good watchdog because the typical Pit Bull loves everybody.

Pit Bulls can make amazing law enforcement dogs. Just ask K-9 handler and Oregon policeman Billy Wells, who has a canine partner many would not expect – a pit bull. Shaka came to Wells’ unit in the Milwaukie Police Department after a series of events changed the death-row dog’s life.

Now’s your chance to make a difference and save the lives of homeless Pitbulls. Your generous donation helps provide shelter, food, and medical care to hundreds of Pitbulls who enter our shelters each year.